The estrella del norte and zhao fished towards Cabo San Lucas today.   The estrella brought in a few wahoo with five dorado making a boat of happy fisherman.  The zhao hit the tuna and dorado.   Choco and Copeche as keeping the lines tight and customers happy, with beautiful late Fall fishing in Los cabos.  It does not get better than this.  (yesterday fishing the Estrella had a handful of small tuna, and fought big tuna for 15 minutes before pulling the hook)  Lost Cabos jackpot just a week away.

Running two tournaments in a row, first three days of the los cabos billfish tournament, the two days at the Bisbees Offshore, finally paid off!  Second MAJOR tournament win for the Estrella del Norte and Team North Star in a year.   Hooking the fish on live bait after chumming for two days straight with calamar and sardines, the fought the tuna for an hour and fifteen minutes before boating the giant tuna.  The first pass at the boat, the fish was not ready to give up,  pulling free and in fact, bending and break the gaff entirely.   The team feared the fish lost for a few minutes, but the hook held true.  15 minutes later the second gaff held true and the fish finally gave over to the inevitable.  James, Donald, Choco, Shalo were all part of the 2012 winning team on the Estrella that boated the 372 lb yellow fin in the tuna jackpot…making it a 2nd major win for this fishing team in under 12 months. 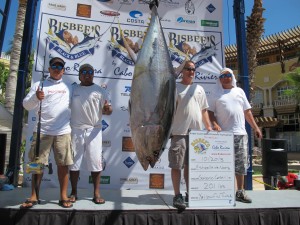