Here are a few of the photos from pre fishing at the Eastcape.  AFTER the Dorado shootout the crew came in with a 55lb dorado which would have won the tournament…how it works right? never on the right day!  Preacher Jaime with a nice marlin, double hook up tio and choco, and running in the sun.  IN all great comments about the Estrella del Norte from all teams, we ran with the BIG boys and held our own in terms of Marlin count AND speed on the water. 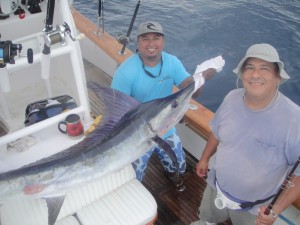 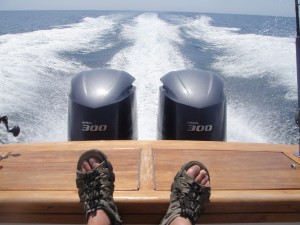 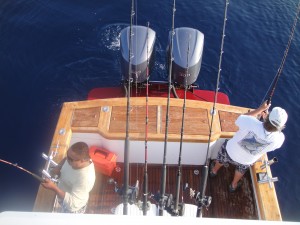 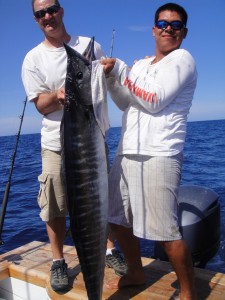 The northstar fishing team prefished the Eastcape hard for a week prior to bisbees.  Our normal focus of tuna was altered due to the fact that the tuna were scare and the large ones were in schools of dolphins…if you could find them,   The last day of bisbees we got into the football tuna putting five on board in 15 minutes…but as Tio Jaime said, ¨this aint tournament fishing¨   We moved out to where we had some marlin luck the previous two days.   About 18 miles off, 1500 feet down 6000 feet in a mile was holding the fish.   Thursday of the tournament we had hooked a LARGE black marlin and fought it for about 15 minutes before throwing the hook.   Friday returned to the same spot, lost about the same size Blue marlin, though only had her for about 5 minutes.    Within the hour (11am or so) we had hooked four fish.  The last being a nice blue, weighing about 200lbs we got to the boat before releasing it, still 100lbs under the weigh limit for the tournament.   All were caught on an assortment of hurricanes…no live bait for us.

On a side interesting note, as sometimes happens, lines out at 4pm on the second day…shallo yells ¨wahoo¨  as he pulls his line from the water.  I look back seeing i still have about 10 yards behind the boat, open the reel up and let about another 20 feet of line out into the engine wash when a 50lb Hoo hits my hurricane….see picture…though we didn´t win anything…it was nice to end the day with a beautiful fish.

Now the wait for the Fall tournaments.  Thanks bisbees for putting on a great tournament! 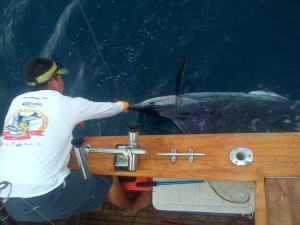 ¨Preacher Jaime¨ spent the day with the Northstar fishing team prefishing for the Dorado shoot and Eastcape Bisbees.  Started the day early with a nice Striper within the first 30 minutes.  Gave us quite an acrobatic show…have pictures but the fish was to far off to show any fancy pictures here…though the catch and release went smoothly.  We went out to the Island and around 88, catching a nice 25 to 30lb dorado.  Fresh dorado last night, nothing like fresh dorado!  Wish us luck tomorrow in the shootout…we have our game plan and at this point it´s all about follow through and luck.

The Northstar fishing team headed out early on the estrella for a half day of fishing.  primarily fishing north towards the direction of the tournaments on the eastcape.  Lots of striped marlin on the surface.  At one point had a double hookup, Tio Jaime casted a caballito on his stella spinning rod, and choco on a light weight jig pole.  We had both fish to the boat in 15 minutes with a nice catch and release session of two pretty stripers.  Saw, many many more on the surface, decided to roll on past them as our sights were on tuna and dorado.  Found a nice large grouping of dolphins, and pulled hochies and cedar plugs.  Three footballies yellowfin tuna at one time…always nice to have fresh tuna on board.  No luck with anything of size…but a stunning successful day on the way, very sunny but a cool breeze.  Back to the dock by 1215.

Estrella, left the dock at 630, a crew of local carpenters on board, after the elustrious Marlin.  Mid morning, the patience paid off in the warmer water break, catching and releasing all four stripers with in a two hour period.  Strange how the days from one to the next change…today, first fish on about the time we got our lines into the water yesterday…difficult to say if an early start made the difference or not.  Tight Lines!

Estrella did a short half day leaving the dock around 1030.  Father and son on board to adventure into the Baja Sun.  The day was a disappointment with no fish caught.  Location, timing, and it´s fishing as we say.  Yet we strive to put on you the targeted fish for each trip, whether Marlin, dorada, tuna…and we don´t always produce.  We will ALWAYS guarantee professional service, quality equipment, and our best shot.  Sorry for the no fish, and we are happy to help you go over your dreams.