Estrella followed the week fishing out to the 1150, however, Boat captain Choco said the water was green and water temps had dropped from the thursday trip…moving around he was unable to find the warm water…no fish offshore…decided to return inshore early to fish rooster fish…all six in the fishing party had a good fight and a fish onboard…Roosters are thick right now—the day day goal of fishing for marlin was an empty boat. 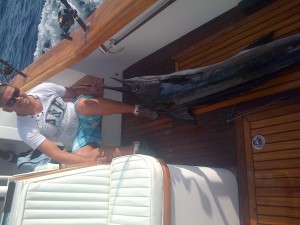 Enrique…who is very familiar with the Estrella del Norte, being one of the two main carpenters who built the Estrella for almost two years, joined us for an early morning out to the 1150 today.  We are a company that emphasizes catch and release for Bill Fish…the boat captain and Enrique both wanted to bring the fish home to their families in celebration of his first marlin catch.

We left the marina at just before 6, the sun had yet to break the horizon.  Lines in the water just before 7 and at 745, Enrique had is fish on board after about a 20 minute battle.  We worked our way back to the marina until lines out at 9, and docked the boat at 930 for an early perfect morning on the water.  Congrats and thank you Enrique for all the hard work and hours you put into building a beautiful boat, home made right here in San jose del cabo…sportfishing capital of the world!

The fishing has continued to be solid.  Many boats are hooking up with marlin, dorado and there are still big wahoo out at the 1150.   As long as the warm water stays close I think we´ll be in solid fish for a while.  Inshore, rooster fishing is on fire.  If you have not had the experience of fighting these voracious feeders and strong fighters you should do a half day trip…in close to shore and keep it simple.

Today it was hot and low wind on the water…though the breeze picked up by the time the boats were coming in.  Reports for 1150 that there were Wahoo and a few nice dorado.  Marlin are still being caught just north along with the 10 to 20 lb dorados.  Nice day to be fishing on the water.

The warm water is back.  Farther north than gordo banks, to the buoys we are seeing lots of marlin.  Schools of dorado can be found in the 10 to 20lb range.  One 40 lb wahoo was brought in winning the fathers day tournament…

Team North Star, today fishing with Donald, Choco, and Remelio (roberto) headed out for the 7am Father´s Day fishing tournament–focusing on Dorado, Tuna and Wahoo.  The water had dropped to below 70 the last few days so we had targeted about an hour north to warmer waters.  To our surprise we found warm water right outside the marina (up near 80 again).  We stuck to our game plan and as you would know it,  our fishing grounds were ripe…but with Marlin not with the target species.  In the first hour we had hooked 4 Stripers.    (and one small dorado).

As is the case, and with some luck, our patience paid off.  We worked our way south again we noticed a small grouping of boats…coming on them we saw the reason…a dead dolphin floating on the surface…which often means schooling fish below.   Five minutes later we boated a nice dorado in the 15lb range and in the last hour of fishing added four more, with the largest topping out at 23lbs.  Back at the dock we learned we had not been in the running to win in the top three weight categories but our fish held to winner in the largest jackpot for the day.  Winners again!… on the Estrellas del Norte…Nice tips around and a great day of fishing paid for with the winnings.

This is Mocho.  If you look at his left wing you´ll notice that only half of it is there.  Mocho lives in the marina and when he´s hungry will come when called.  (of course all the pelicans come when you wave a bait fish around) But Mocho knows his name and has built a bit of local fan club here at Puerto Los Cabos. 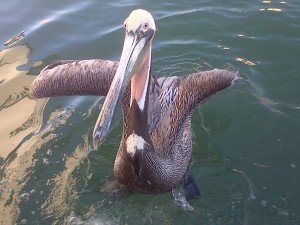 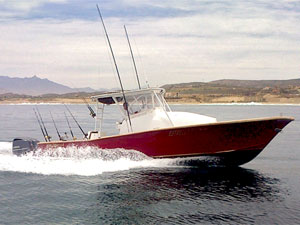 The Estrella del Norte has been fishing for about 6 months now. This Carolina Custom design built right here in San Jose Del Cabo is a dream come true, built exactly to our requirements after having spent a lot of time out on the waters around Cabo.

We’re proud of this new boat, with its speed, comfort, and streamlined efficiency.   When you spend a day on the Estrella del Norte you´ll not want to fish on another boat.

Learn more about our boats here.